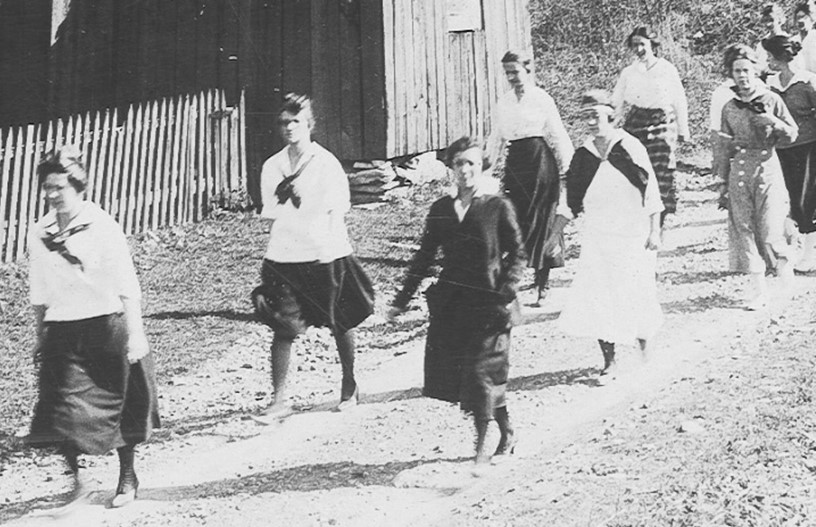 One of the Branch’s first initiatives was to lobby the Pennsylvania State College to offer physical education for women along with appropriate facilities. Here are some co-eds on their new “track” or walking course in 1918.

In the winter of 1916, ten women gathered in a women’s dormitory on the Penn State campus to establish the Central Pennsylvania Branch of the Association of Collegiate Alumni (ACA). The women were seeking camaraderie but as college graduates, they also had a vested interest in advancing women’s education. Six years later, the ACA merged with the American Association of University Women (now AAUW) and the State College Branch was born.

The State College Branch forged a foundation committed to gender equity in education and women’s welfare. It purchased materials for libraries, established a loan fund to assist women students, and lobbied for physical education facilities and women’s restrooms in public buildings. It fought discrimination on co-ed campuses and pushed for national legislation that benefitted women and children. Members contributed $5 to help future Nobel Prize recipient Marie Curie buy radium, which was given to her by President Harding on behalf of American women. By mid-century, AAUW members were integral to enhancing the quality of life in a burgeoning State College. They funded and/or initiated local non-profits including the Food Bank, the Senior Citizens Center, the Voluntary Action Center, Schlow Memorial Library, the International Hospitality Council, and the Women’s Resource Center.

In 1962, a handful of branch members with foresight started a Used Book Sale in State College that netted all of $176. Today the annual Used Book Sale has grown into a popular community event involving hundreds of volunteers and the sale of nearly a quarter of a million books. Using the funds raised, the branch has donated approximately 2.5 million dollars to community programs and scholarships benefitting women and has established a fellowship to enable international women to study in the United States. This philanthropy has helped to fulfill the promise of empowering women that was begun by just ten women in 1916 and continues today by the committed members of AAUW State College.

Public restrooms for women, university sports fields dedicated to female athletes, the first local day care center: for generations, local women have struggled to increase equity for women and children, one issue at a time. Read more about their experiences here.